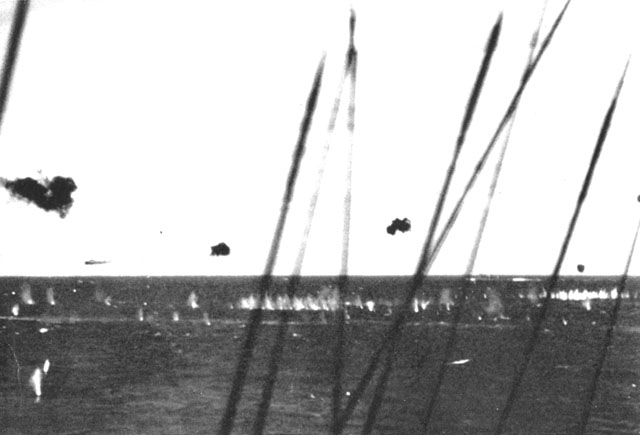 Except for the two excursions to bombard Jap Islands and one to escort the stricken Franklin, the Alaska’s combat duty has consisted solely in operating with fast carrier task forces. Most of our excitement has been vicariously enjoyed through the pilots and flight crews of the planes operating from our carriers. They have shot down ninety-five per cent of the planes that would have attacked us, themselves taking the beating and the loss that was intended for us and leaving only five per cent for us to handle. They sank the Yamato and her satellite cruisers when she incautiously left the Empire for Okinawa. They have made us thankful a hundred times that the Navy has such men to fly her planes.

Such planes as did get through to us by evasive action, and there were about thirty of them in four months, were shot down by one or another of the ships in our group, the Alaska ‘receiving credit for five of them. One of those shot down was never seen by us until the spouting flames from his gasoline tanks brilliantly lighted the dark night as he plummeted into the sea.

Toward the close of the Okinawa campaign, our task group was detached and steamed south to Leyte Gulf, reaching that warm haven on 13 June.