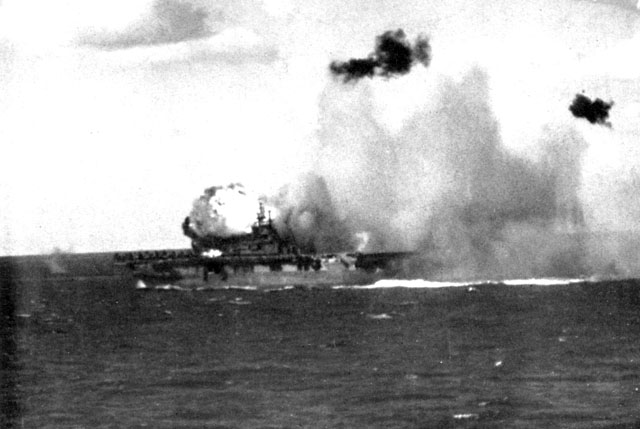 For the balance of that day we were under frequent attack by single Jap planes, none of which succeeded in crashing on their favorite target, the flight deck of a carrier. Because the low heavy clouds made evasion comparatively easy, some of these Japs eluded Our fighter planes and one more had to be shot down by the guns of the Alaska as he was attempting to commit suicide on the deck of the Intrepid. Early next morning we saw the flash of an explosion, followed by a slowly rising column of heavy smoke about ten miles off to the west of Our group. All who saw it knew that a carrier had been hit and soon the radio brought confirmation from the Franklin that she had been the victim of a suicider. During the day we watched her as explosion and fire shook and scorched her gallant frame, then in the afternoon the Alaska, Guam, Pittsburgh, and Santa Fe, together with a destroyer screen, were ordered to escort the Franklin out of the danger zone. She was still a blackened, smouldering hulk when she regained control of her own power and steering and the long trip back to a safe distance from Japan was begun. In spite of the fact that the Japs knew she was badly crippled, for the Franklin was only sixty miles from Japan when she was hit, only one aircraft attacked her on the way out, and that attack failed. The courage and stamina of the Franklin’s crew was classic.

Having seen the Franklin out of danger, the escorting ships returned to their respective task groups, the Alaska rejoining T.G. 58.4 now busily engaged in making continuous air strikes against Okinawa and other islands in the Ryukyu chain. To vary the routine, Alaska and Guam, left the support group on 27 March, and together with other ships bombarded that night the Jap island of Minami Daito Jima midway between Iwo Jima andOkinawa. Though the island was known to have enemy artillery and aircraft on it, we received no return fire. The next morning we rejoined the carriers again staying with them this time until the invasion of Okinawa was nearly completed. Only once again did we leave a card on the Japs by mean~ of shore bombardment, when at dawn, 9 June, the Alaska and Guam poured 12-inch and 5-inch shells into enemy installations on Okino Daito Jima, near our former island target, Minami.